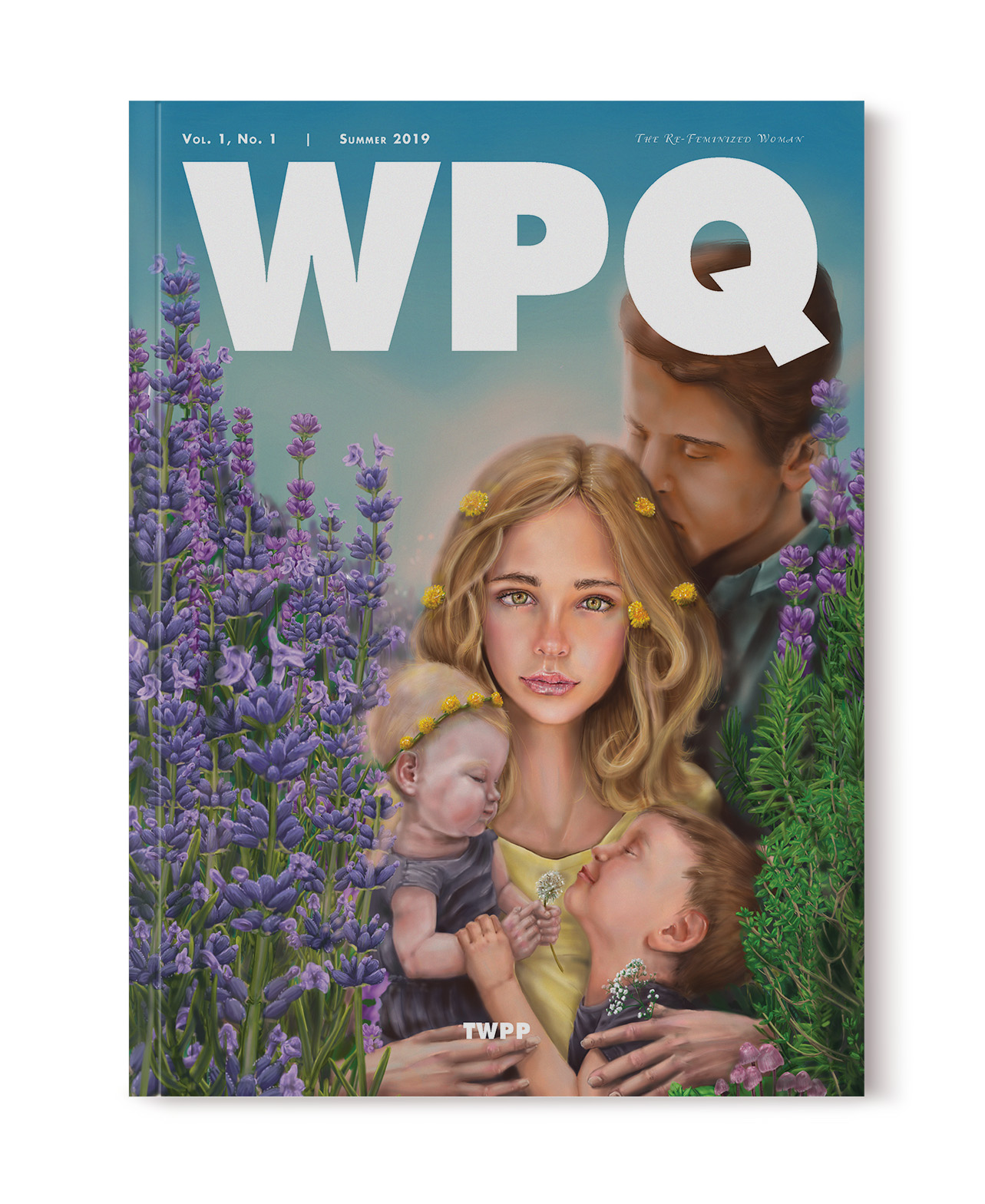 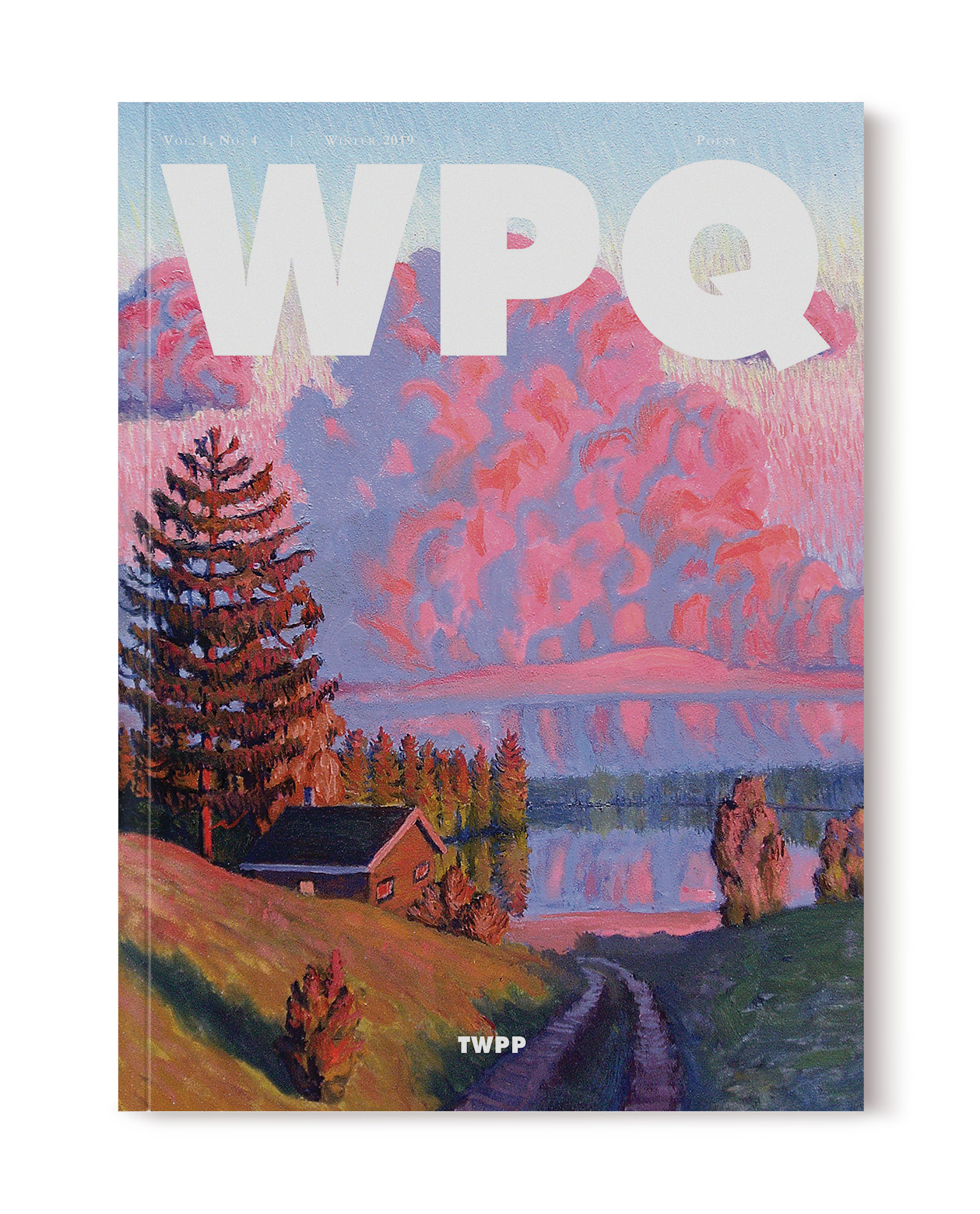 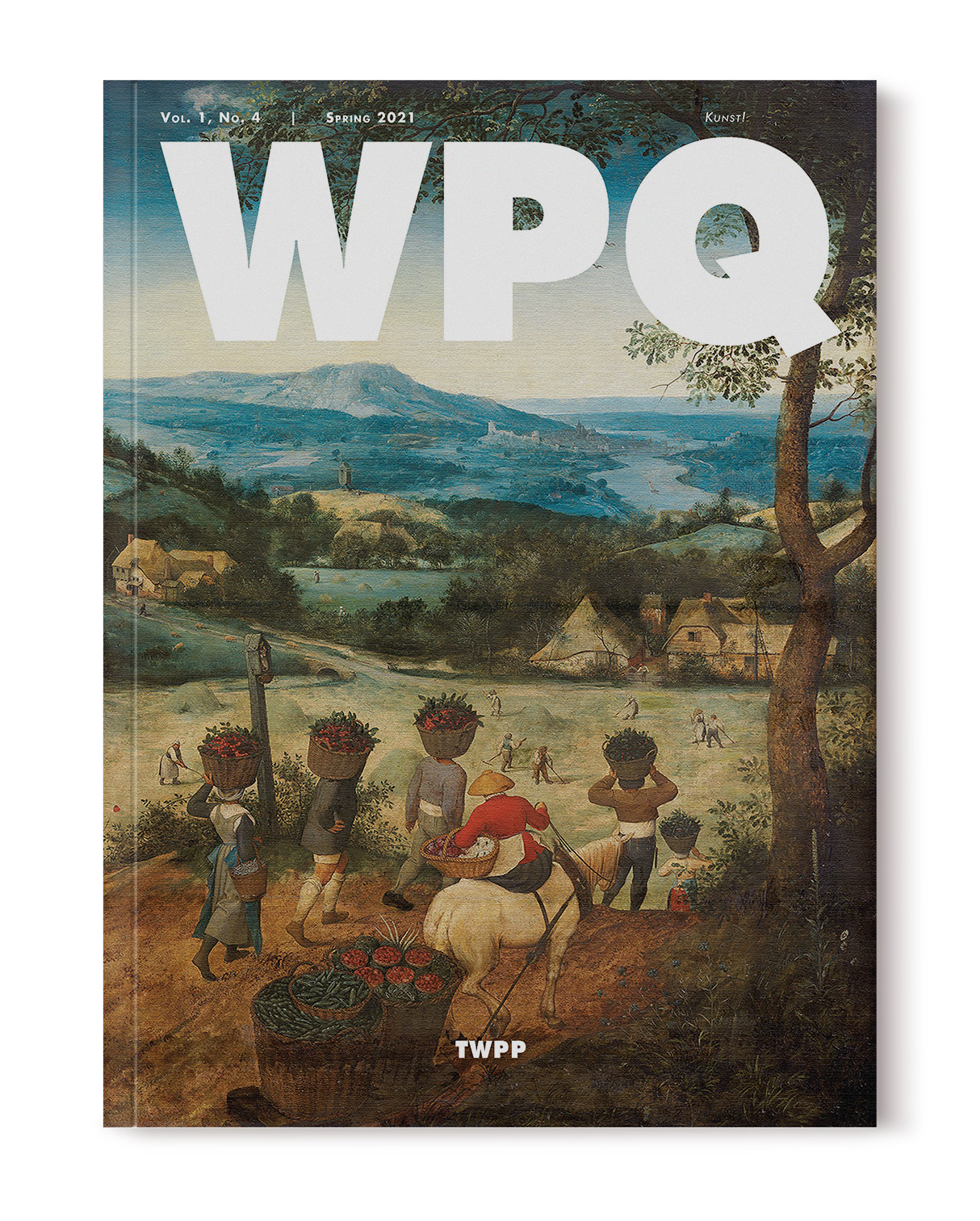 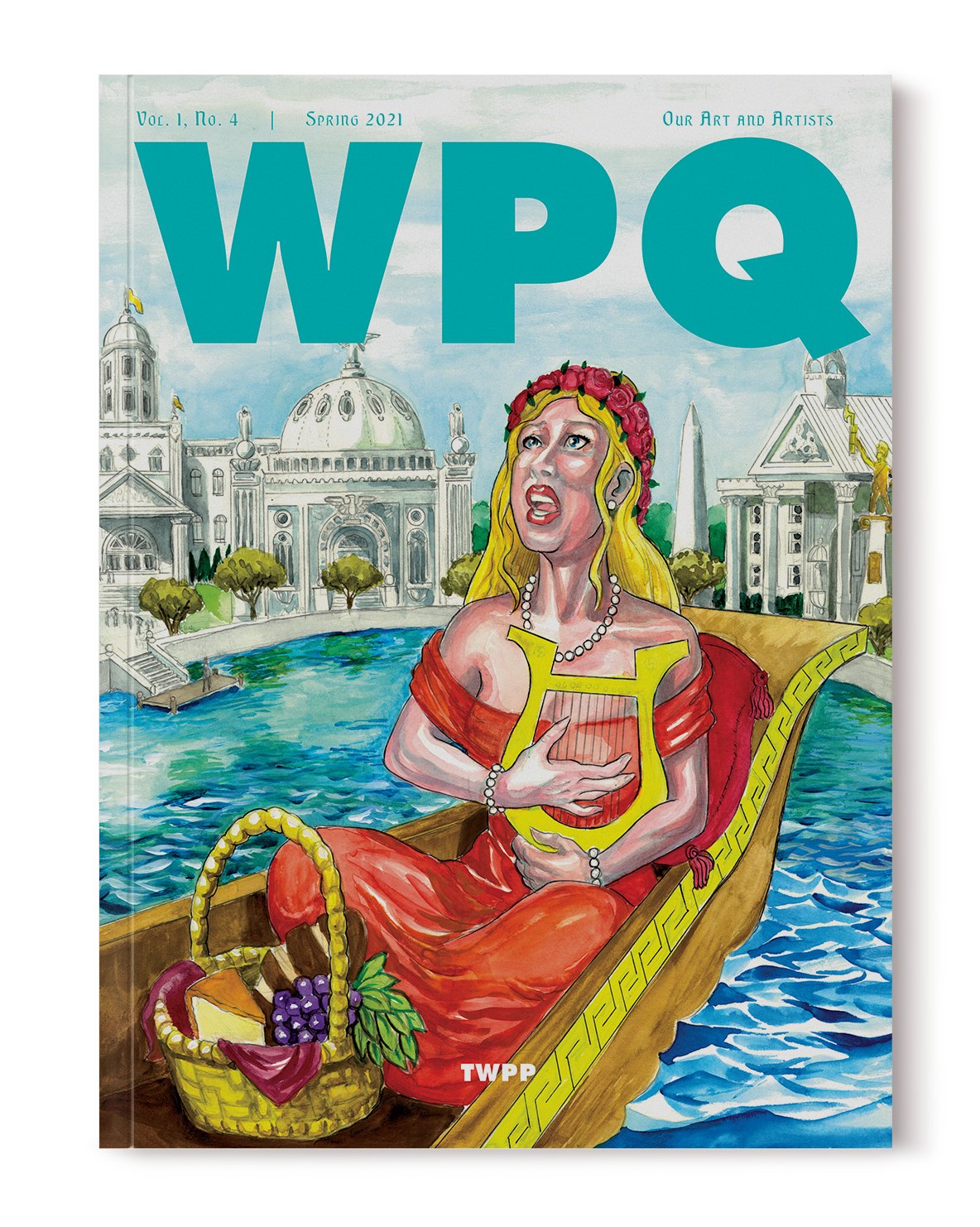 The WPQ Volume I Bundle

The Volume I Bundle gives you all four issues of The White People’s Quarterly at a reduced rate. It comes with the original family-friendly and non-political content—including hundreds of written pieces that range from essays to short stories, poetry and literary criticism, along with art, photography, interviews, and more. Accompanied by professionally crafted layouts that have been upgraded to reflect our increased design capabilities, and standardized to fit together perfectly as a collection, the Volume I Bundle includes the following four issues:

Issue No. 1 of The White People’s Quarterly—our premiere issue—features original cover art by the gifted hand of Aileen, and visually defines in its purest form what we represent. Featured written pieces include a powerful selection from Jason Köhne’s book Born Guilty, original poetry by Jared George, a guide to becoming a community organizer by Harold L. Byron, a thrilling travel story by Jim Modoc, an exposition of art in the post-modern age by Donald Kent, and a humorous short story by Paul Marlais. However, the issue centers on the family and in particular “The Re-Feminized Woman,” so the focus-pieces are provided by Ashley MacAlistair, whose article “Reclaiming Femininity” offers tips and guidelines for young women seeking to live healthy and traditional lives, and Mina Therese, whose powerful personal journey emphasizes the trials and tribulations one goes through as they trade backward modernity for a more natural lifestyle, and how this transformation is leading to a “Renaissance of the Traditional.” Also included in the first issue is a Q&A with the Mamas and the Pepes, photography by the Light of Decay, a review of Überfolk’s album Music for Nations by the New Paradigm Review, along with poetry, art, recipes, and a republishing of T.S. Eliot’s famous essay “Tradition and the Individual Talent,” with an introduction by the Editor. Issue No. 1 remains the most important to us, due to the uncertainties going in and the challenges we faced along the way, but with the help of Creative Director Jeff Winston of the White Art Collective we got the job done, and by some metrics it was the most successful quarterly magazine of the 2019 Summer season. Aileen’s beautiful cover conveys the essence of what we stand for as a family-friendly publisher, and we are grateful for those who took a chance and contributed to it, nearly all of whom have contributed to subsequent issues. Among them are our faithful, White-Positive sponsors, such as the White Art Collective, WhiteDate.Net, KosChertified, and the Mighty White Soap Co., whose elegant ads can as well be found among the content.

Issue No. 2 of The White People’s Quarterly features cover art by Herrmann Radwulf, who has been a consistent contributor and friend since, and designed two book covers for The White People’s Press. Leading the issue are written pieces on the genetic testing industry by an in-field specialist appropriately named Gene Tester, an extraordinary meditation on Ancient Greek mythos by Hektor Troy, a moving story that underscores the uncertainty and volatility of life by Mina Therese, a startling look into the kosher certification racket by the team at KosChertified, and a paramount, in-depth article on the Art of Artistic Critique by Jeff Winston of the White Art Collective. Other pieces include an interview by music correspondent Mama P. with the colorful and charismatic Banjo-picking phenom Jack Hwite, an exclusive WPQ Q&A with our friend and the creator of the comprehensive, 10-hour, epic documentary Apotheosis of Evil, Based British, an excerpt from Josh Neal’s book I’m a Feminist and 10 Other Things Women Never Want to Hear that explores the complex dynamics between men and women, and a prescient short story about how even mistaken accusations of “racism” can take on a life of their own in our hyper-propagandized society by writer and author of the book The Reclamations, Paul Marlais. The central theme of Issue No. 2, though, is poetry, which is why the subtitle is the former, commonly used term of what we today know as “poetry”: Poesy. A tremendous roster of lyricists thus take center stage, led by three pieces on a range of prominent topics by J.C. Adams, a perceptive reflection on the unfortunate reality of “honesty” in an age of deceit by Donald Kent, an Aesop-like anthropomorphized children’s tale by Luka Calgues, and a subtle and elusive short work from the extensive repertoire of Jared George. Among these first-rate works is Ashley MacAlistair’s eggnog recipe—this being the Winter 2019 issue, after all—and a descriptive and visual breakdown of cover artist Herrmann Radwulf‘s approach to his craft that allows the reader to see the different stages of the cover-creation process. The breadth of variety in Issue No. 2 of The White People’s Quarterly exemplifies the wide-ranging interests, knowledge, and skills unique to us as a people and is inoffensive to any normal person’s sensibilities, making it a good resource for those struggling to accept that it is okay for them to positively identify with who they are. Returning as well are our wonderful sponsors: the White Art Collective, KosChertified, the Mighty White Soap Co., and WhiteDate.Net.

Issue No. 3 of The White People’s Quarterly centers on the work of Dutch/Flemish artist Pieter Bruegel, whose piece The Haymaking features as the cover art. A touching article by Helen Doe on the topic of how to maintain a happy marriage serves as the centerpiece of this exceptional issue, and Doe’s personal story about how she turned her marriage around by making conscious changes and embracing her femininity is a heartening read with valuable advice all White couples will benefit from. Also featured is a brilliantly satirical piece by returning writer Hektor Troy, a mini-Candide about a backpacking trip to a modern multicultural Europe that brings needed humor to a serious and disturbing reality. Other highlights of Issue No. 3 include a phenomenal review of Jason Köhne’s seminal book Go Free, penned by K.D., and a review of Saint-Loup’s book The Boer Attacks by Dionysos Andronis, which details some of the backstory to South Africa’s past and ongoing struggle—especially insightful and relevant given the current trends in the West. Prolific English author Sean Haughton provides an excerpt from his book Guided by Ghosts, involving a dialogue between siblings that is both mysterious and instinctual, and deals with how we talk to others about the issues we face, while two additional poems by Haughton stand in stark contrast with the light nature of the former passage and reify his stylistic range. Our favorite music correspondent, Mama P., returns again with another fantastic Q&A, this time with “Ghost Folk” musician Hiraeth, whose distinctive style continues to evolve as she becomes an increasingly important voice and public figure for White interests. The WPQ proudly welcomes back staple Jared George, whose beautiful poetry once again adorns the pages of the magazine, along with poems by J.C. Adams, Afibjorn, Anna, and the aforementioned Sean Haughton. Bringing the issue to a formidable end is Dr. Samuel Johnson’s challenging but pivotal essay Prelude to Shakespeare, with an extended prelude to the Prelude by the Editor, who further contributes short pieces on, and presents modern analyses of, the works of the Issue’s themed artist, Pieter Bruegel, such as his paintings The Tower of Babel (1563), View of the Bay of Naples (1562), and The Fall of Icarus (c. 1555-1560). A look at The White People’s Press’ currently published and forthcoming books can also be found in this expansive issue—our longest to date—as well as ads from our friends and White-Positive sponsors like the White Art Collective, KosChertified, and WhiteDate.Net.

Issue No. 4 of The White People’s Quarterly showcases the art and artists in our sphere, beginning with the vivid cover art by the multi-talented Donald Kent. Inside, the reader will find interviews with some of the most prominent artists in our sphere, including Kent, English artist Skinless Frank, and J. LaDarc, alongside pieces by Issue No. 2 cover artist Herrmann Radwulf. The feature essay by writer John Malt is a must-read, and explores the depths of, and mechanisms behind, the ubiquitous anti-white narrative. Martin Friedrich’s two outstanding pieces, “Homeric Crossroads” and “The Great Noon,” offer sound, philosophical analyses of Homeric works and the writings of Nietzsche, superb original short stories by Jason Knight and Sean Haughton respectively bring heavy doses of mythology and dystopia to the fore, and poetry by Alastair Spate and Jared George represent the contrast and variety The WPQ continually delivers, with the former covering the recent killings of Whites like Justine Damond and Ashli Babbitt, and the latter spotlighting the aesthetic lyricism of George. Music correspondent Mama P. returns yet again for a sit-down with rising English musician Jody Kay in this issue, a chapter excerpt from veteran writer Spencer J. Quinn’s new novel Charity’s Blade gives the reader a glimpse into a future world of both mystery comedy, and appearing in new form are Lucy Brown’s terrific interviews for SCUM Media with some of the contributors to Folk—the transformative coffee table book, conceived of by Jared George and published by The White People’s Press in November 2020, on the topic of what it means to be a people. Out of the diverse lineup of leading contributors, the reader will hear from Ilenia Contessa, Jason Köhne, Laura Towler, Jared George, Lovely Porridge, and Jeff Winston what it was like to be a part of the project. Topping off Issue No. 4 is Samuel Taylor Coleridge’s famous poem, The Rime of the Ancient Mariner, accompanied by illustrations by Gustave Doré and an introduction by the Editor that explains how this poem is directly related to the establishment of The White People’s Press. Information about several of our already-published or upcoming books can be found in the Issue, as well as ads from our usual team of friends and sponsors, such the White Art Collective, KosChertified, WhiteDate.Net, and the Mighty White Soap Co. But, as we look ahead to Volume II, we are proud to announce the addition of two new sponsors in SCUM Media and Antelope Hill Publishing. And deserving of special mention is a tribute that will appear in this issue alone, from Jason Köhne, Althaea Promethiea, and FinalBlossom. It is a list of the many “Contributors to White Wellbeing,” and a heartwarming eulogy to those who take risks and devote their time and financial resources to help strengthen our people’s collective identity, destigmatize the notion that White people are not allowed to assert their group interests, and build a foundation that will better ensure that our children and those to come are able to lead healthy lives and build immunity to the anti-white narratives currently pervasive in Western societies.

The Volume I Bundle offers new readers savings and quality, and is loaded with content from some of the most talent individuals in our movement. A lot of work has gone into the creation of The White People’s Quarterly, and we are happy to be able to provide it at increasingly lower prices. We do our best to convey a positive and wholesome message, and will continue to do so, because that is ultimately who we are.