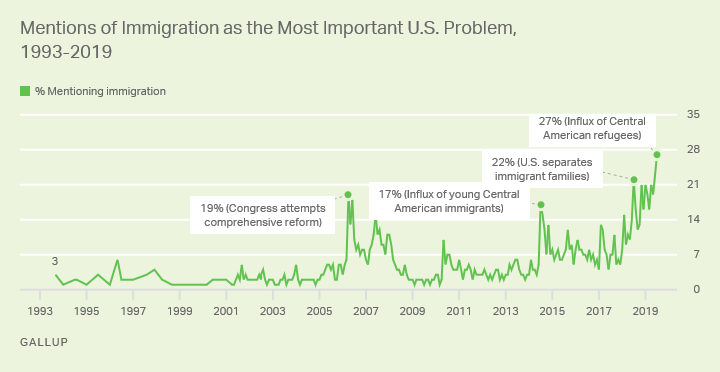 WASHINGTON, D.C. — After hitting a new high last month, mentions of immigration as the most important problem facing the U.S. increased further to 27% in July. Since Gallup began regularly recording mentions of the issue in 1993, immigration has been cited by an average of 6% of Americans, though it has been higher in recent years. There have been occasional, typically short-lived, spikes when major immigration events were occurring.

The July 1-12 poll was conducted as the U.S. government continues to struggle to handle the large number of Central American immigrants attempting to enter the U.S. via the U.S.-Mexico border. The issue was brought into sharper focus in early July when Democratic congressional leaders and Republican Vice President Mike Pence made separate trips to facilities that are holding the migrants as they await asylum hearings. While Republican and Democratic leaders’ assessments of the situation differed, both acknowledged overcrowded conditions and characterized the situation at the border as a crisis.

Immigration now sits at the top of the “most important problem” list for just the fourth time in Gallup’s trend, having also done so in July 2014, July 2018 and November 2018. The issue edged out the government, which has been a fixture at or near the top of the list throughout the latter part of the Obama administration and the Trump administration.
Race relations or racism (7%) and healthcare (7%) are the only other two issues to receive as many as 5% of mentions this month.

Americans’ concern about immigration has reached a high point in Gallup’s measurement of the issue, at least based on the percentage of U.S. adults who perceive the issue to be the most important problem facing the country. Dramatic images of overcrowded detention centers and acknowledgments from politicians of both political parties that the issue is a crisis have likely contributed to the rise in concern. And even as Democrats and Republicans continue to dispute the best way to address the situation, Congress has passed and President Donald Trump has signed legislation to spend over $4 billion in additional funds to address the situation at the border.

That recent law marked a rare instance when the parties found common ground on immigration since a bipartisan attempt to address the issue in the mid-2000s failed. Obama, who was unable to get a Republican-led Congress to pass immigration reform, resorted to executive orders to attempt to institute new immigration policies. Federal courts blocked that course of action. Immigration was arguably the top issue in Trump’s 2016 campaign, and he, too, has been unable to pass favored legislation on the issue, including the full amount of funding he sought to extend the border wall between the U.S. and Mexico. Many of his attempts to circumvent the legislative process have also been blocked by Congress and the courts.

As such, immigration is likely to remain a top issue for Americans, particularly at points when large numbers of immigrants or asylum seekers are attempting to enter the country illegally.

Despite being consistently voted the most important issue, nothing ever seems to get done about it.

The question all white people should be asking is: “Is immigration good for us?”

The clear answer is “No.”