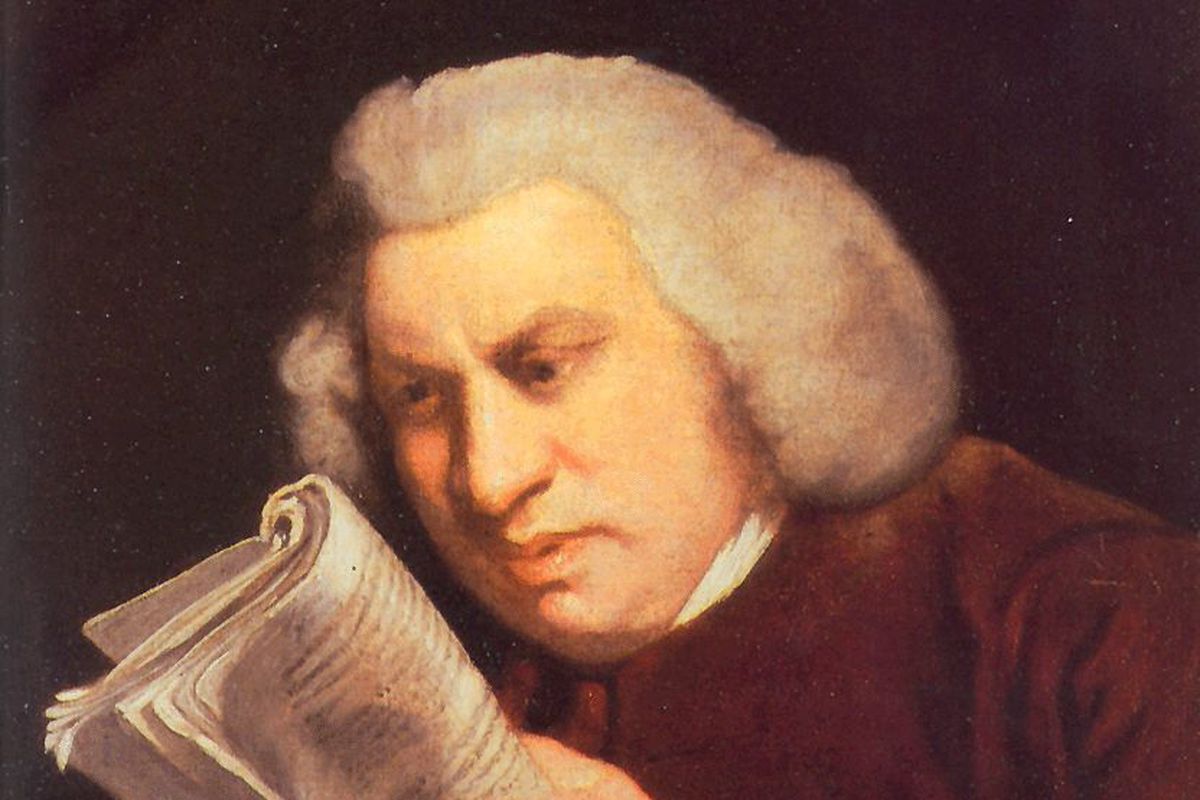 Samuel Johnson (18 September 1709 [OS 7 September] – 13 December 1784), often referred to as Dr. Johnson, was an English writer who made lasting contributions to English literature as a poet, playwright, essayist, moralist, literary critic, biographer, editor, and lexicographer. He was a devout Anglican.[1] Politically, he was a committed Tory. The Oxford Dictionary of National Biography describes Johnson as “arguably the most distinguished man of letters in English history”.[2] He is the subject of James Boswell‘s The Life of Samuel Johnson, described by Walter Jackson Bate as “the most famous single work of biographical art in the whole of literature”.[3]

To good that mocks approach.

There is no temper so generally indulged as hope: other passions operate by starts on particular occasions, or in certain parts of life; but hope begins with the
first power of comparing our actual with our possible state, and attends us through every stage and period, always urging us forward to new acquisitions, and holding out some distant blessing to our view, promising us either relief from pain, or increase of happiness.

Hope is necessary in every condition. The miseries of poverty, of sickness, of captivity, would, without this comfort, be insupportable; nor does it appear that the happiest lot of terrestrial existence can set us above the want of this general blessing; or that life, when the gifts of nature and of fortune are accumulated upon it, would not still be wretched were it not elevated and delighted by the expectation of some new possession, of some enjoyment yet behind, by which the wish shall be at last satisfied, and the heart filled up to its utmost extent.

Hope is indeed very fallacious, and promises what it seldom gives; but its promises are more valuable than the gifts of fortune, and it seldom frustrates us
without assuring us of recompensing the delay by a greater bounty.

I was musing on this strange inclination which every man feels to deceive himself, and considering the advantages and dangers proceeding from this gay prospect of futurity, when, falling asleep, on a sudden I found myself placed in a garden, of which my sight could descry no limits. Every scene above me was gay and gladsome, light with sunshine, and fragrant with perfumes; the ground was painted with all the variety of spring, and all the choir of nature was singing in the groves. When I had recovered from the first raptures, with which the confusion of pleasure had for a time entranced me, I began to take a particular and deliberate view of this delightful region. I then perceived that I had yet higher gratifications to expect, and that, at a small distance from me, there were brighter flowers, clearer fountains, and more lofty groves, where the birds, which I yet heard but faintly, were exerting all the power of melody. The trees about me were beautiful with verdure, and fragrant with blossoms; but I was tempted to leave them by the sight of ripe fruits, which seemed to hang only to be plucked. I therefore walked hastily forwards, but found, as I proceeded, that the colours of the field faded at my approach, the fruit fell before I reached it, the birds flew still singing before me, and though I pressed onward with great celerity, I was still in sight of pleasure of which I could not yet gain the possession, and which seemed to mock my diligence, and to retire as I advanced.

Though I was confounded with so many alternations of joy and grief, I yet persisted to go forward, in hopes that these fugitive delights would in time be overtaken. At length I saw an innumerable multitude of every age and sex, who seemed all to partake of some general felicity; for every cheek was flushed with confidence, and every eye sparkled with eagerness: yet each appeared to have some particular and secret pleasure, and very few were willing to communicate their intentions, or extend their concern beyond themselves. Most of them seemed, by the rapidity of their motion, too busy to gratify the curiosity of a stranger, and therefore I was content for a while to gaze upon them, without interrupting them with troublesome inquiries. At last I observed one man worn with time, and unable to struggle in the crowd; and, therefore, supposing him more at leisure, I began to accost him: but he turned from me with anger, and told me he must not be disturbed, for the great hour of projection was now come when Mercury should lose his wings, and slavery should no  longer dig the mine for gold.

I left him, and attempted another, whose softness of mien, and easy movement gave me reason to hope for a more agreeable reception; but he told me, with a low bow, that nothing would make him more happy than an opportunity of serving me, which he could not now want, for a place which he had been twenty years soliciting would be soon vacant. From him I had recourse to the next, who was departing in haste to take possession of the estate of an uncle, who by the course of nature could not live long. He that followed was preparing to dive for treasure in a new-invented bell; and another was on the point of discovering the longitude.

Being thus rejected wheresoever I applied myself for information, I began to imagine it best to desist from inquiry, and try what my own observation would discover: but seeing a young man, gay and thoughtless, I resolved upon one more experiment, and was informed that I was in the garden of Hope, the daughter of Desire, and that all those whom I saw thus tumultuously bustling round me were incited by the promises of Hope, and hastening to seize the gifts which she
held in her hand. I turned my sight upward, and saw a goddess in the bloom of youth sitting on a throne: around her lay all the gifts of fortune, and all the blessings of life were spread abroad to view; she had a perpetual gaiety of aspect, and every one imagined that her smile, which was impartial and general, was directed to himself, and triumphed in his own superiority to others, who had conceived the same confidence from the same mistake.

I then mounted an eminence, from which I had a more extensive view of the whole place, and could with less perplexity consider the different conduct of the crowds that filled it. From this station I observed, that the entrance into the garden of Hope was by two gates, one of which was kept by Reason, and the other by Fancy. Reason was surly and scrupulous, and seldom turned the key without many interrogatories and long hesitation; but Fancy was a kind and gentle portress, she held her gate wide open, and welcomed all equally to the district under her superintendency; so that the passage was crowded by all those who either feared the examination of Reason, or had been rejected by her.

From the gate of Reason there was a way to the throne of Hope, by a craggy, slippery, and winding path, called the Streight of Difficulty, which those who entered with the permission of the guard endeavoured to climb. But though they surveyed the way very carefully before they began to rise, and marked out the
several stages of their progress, they commonly found unexpected obstacles, and were obliged frequently to stop on the sudden, where they imagined the way
plain and even. A thousand intricacies embarrassed them, a thousand slips threw them back, and a thousand pitfalls impeded their advance. So formidable were
the dangers, and so frequent the miscarriages, that many returned from the first attempt, and many fainted in the midst of the way, and only a very small number were led up to the summit of Hope, by the hand of Fortitude. Of these few the greater part, when they had obtained the gift which Hope had promised
them, regretted the labour which it cost, and felt in their success the regret of disappointment; the rest retired with their prize, and were led by Wisdom to the bowers of Content.

Turning then towards the gate of Fancy, I could find no way to the seat of Hope; but though she sat full in view, and held out her gifts with an air of invitation, which filled every heart with rapture, the mountain was, on that side, inaccessibly steep, but so channelled and shaded, that none perceived the impossibility of ascending it, but each imagined himself to have discovered a way to which the rest were strangers. Many expedients were indeed tried by this industrious tribe, of whom some were making themselves wings, which others were contriving to actuate by the perpetual motion. But with all their labour and all their artifices, they never rose above the ground, or quickly fell back, nor ever approached the throne of Hope, but continued still to gaze at a distance, and laugh at the slow progress of those whom they saw toiling in the Streight of Difficulty.

Part of the favourites of Fancy, when they had entered the garden, without making, like the rest, an attempt to climb the mountain, turned immediately to the vale of Idleness, a calm and undisturbed retirement, from whence they could always have Hope in prospect, and to which they pleased themselves with believing that she intended speedily to descend. These were indeed scorned by all the rest; but they seemed very little affected by contempt, advice, or reproof, but were resolved to expect at ease the favour of the goddess.

Among this gay race I was wandering, and found them ready to answer all my questions, and willing to communicate their mirth; but turning round, I saw two dreadful monsters entering the vale, one of whom I knew to be Age, and the other Want. Sport and revelling were now at an end, and an universal shriek of affright and distress burst out and awaked me.

Any cookies that may not be particularly necessary for the website to function and are used specifically to collect user personal data via analytics, ads, or other embedded contents are termed non-necessary cookies. It is mandatory to procure user consent prior to running these cookies on your website.