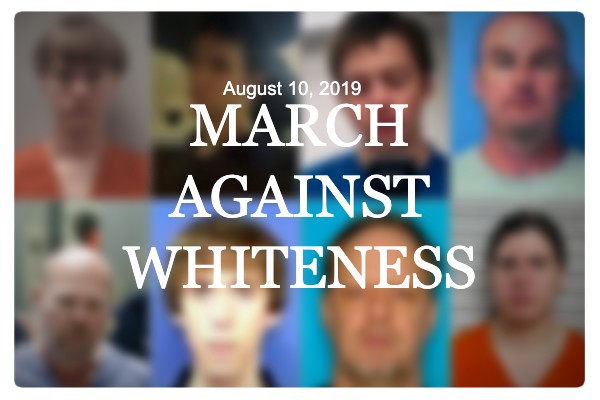 In wake of yet another mass casualty event in not only El Paso Texas but also Dayton Ohio on the same day, it is time the targeted communities of America stood up against the prevailing threat of our time. It is time for us to March Against Whiteness.

President Donald J Trump took office under a divisive platform of hate and racism only to assume the position of commander and chief through questionable means of hacking voting machines with the help of his Russian allies. Rural White America has spoken. They are a regressive group of racists who will do almost anything to hold on to the fleeting power they once held a monopoly over. From marching in Charlottesville to online hate trolls, it would appear that white America has found their new niche within the 21st century, The Mass Shooter.

As a woman of color, i have watched this country fall apart since Obama left office. White men have become the number 1 terrorist threat facing the nation today and even the current President of the United States refuses to address the prevailing issue of White Terrorism.

This is why i am calling on all members of minority communities to set up their own March Against Whiteness rallies in their cities to show this country once and for all how we are ALL feeling about this horrible situation facing black and brown communities alike.

On August 10, 2019. New York, San Fransisco, Boston and all other major cities in America will be holding a March Against Whiteness rally to express our anger, frustration and desperation with the current political climate of racism and hate under the Trump Presidency.

This is an official declaration and proclamation. We will no longer stand idle as our brothers and sisters are gunned down by white supremacists for nothing other than the color of their skin.

I beg of you to set up your own March Against Whiteness in whatever city you reside in and to spread the word. The time for action is NOW!